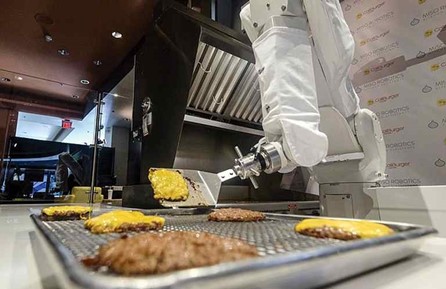 If you think Pinocchio has been exiled from the Oval Office, not so fast.  Some false narratives just play too well in focus groups to resist.

In his pre-Super Bowl CBS interview, President Joe Biden passed along a couple of talking points that reveal either ignorance of some economic realities or a cynical willingness to bend the truth.  The subject was the $15-per-hour federal minimum wage, which progressives now hawk as Covid recession medicine, but which is really snake oil.

Mr. Biden first made a routine and compassionate assertion:  “Look, no one should work 40 hours a week and live below the poverty wage.”  Sure – that’d be great, as would much else we fervently wish for.  But then he crossed a line into falsehood:  “And if you’re making less than $15 an hour, you’re living below the poverty wage.”  Simply not true (at least 90% of the time).  Consider the accompanying table. 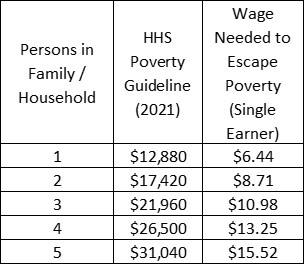 The poverty guidelines published by the Department of Health and Human Services show, for example, that if you’re single with no dependents and earn $6.45 per hour – which is actually below the current federal minimum of $7.25 – you’re above the official poverty wage.  In fact, unless you’re the sole earner in a household of five (and only 9.3% of American households have five or more persons – with many of those having multiple earners), far less than $15 an hour will get you out of poverty.

Of course, that’s a technical point, and most would forgive Mr. Biden his fib about it.  We all want work to be rewarded richly; we want incomes not just to surpass the minimal, official poverty thresholds but to enable people to flourish and enjoy their share of the American Dream.

And that’s why Mr. Biden’s second fib – that “all the economics show, if you do [$15], the whole economy rises” – is more dangerous.  What “all the economics” really show, and which the latest report by the Congressional Budget Office confirms, is that a $15 minimum wage would benefit some but inflict considerable pain on others.  The CBO estimated that it’s likely to destroy 1.4 million jobs by 2025 – with some chance of wiping out up to 2.7 million – and increase the deficit by $54 billion over 10 years.  But it might also lift 900,000 people out of poverty and, overall, increase labor incomes by $333 billion.

This trade-off is complicated both economically and ethically.  Some cavalierly dismiss the job losses as acceptable – that “you have to break some eggs to make an omelet” (a phrase that goes back to the French revolutionary Robespierre but is often misattributed to Lenin).  There’s even some research (from left-leaning academics or union-funded advocacy groups) that find these losses to be “minimal” or “trivial,” though an objective examination of the literature confirms that higher minimum wages destroy jobs, especially for the less-educated and young adults starting to climb the economic ladder.

But two points:  First, the net gains to the “winners” in this trade-off will not be as great as hoped.  If you’re lucky enough to keep your job at the $15 minimum, you’ll find that you no longer qualify for some important transfer benefits (the “social safety net”) that have long helped raise the incomes of the working poor.  Second, those programs are actually a better way to raise the incomes of the working poor because they do so without distorting labor markets and destroying jobs.

Consider a hypothetical Maryland single mother of one.  Back in 2015, if she was working at our then-minimum of $8.25 per hour or $16,500 a year, her after-tax income would have risen by $4,930 thanks to federal and state Earned Income Tax Credits (EITC) and another $3,048 in Supplemental Nutritional Assistance Program (SNAP) benefits.  Those transfers increased her effective hourly wage by almost $4 (to $12.24) – and that leaves out any Medicaid or housing subsidies she also qualified for.

As Maryland bumps its minimum upward (to $11.75 today, en route to $15 by 2025), state and federal formulas reduce those transfers and add taxes.  So at a $15 hourly, our hypothetical single mom – again, assuming she’s not automated out of her job – will find her EITC and SNAP benefits falling sharply and her payroll taxes rising.  The precise formulas for these and other transfer programs are ever-changing, but as of that 2015 base year our mom’s annual net income would have risen not by the hoped-for $13,500 but by a far more modest $5,500 (roughly – and again omitting possible lost medical and housing subsidies).

This is not to argue that the Fight for $15 will make many working poor absolutely worse off.  But it is clear that wage controls are a poor way to transfer income, and transfer programs like the EITC are superior as means of raising incomes without destroying jobs.  To justify a $15 hourly wage, workers must supply at least $15 in hourly marginal revenue; there are an awful lot of jobs (1.4 million, per the CBO) where this is not likely – i.e., where each hour of labor generates $7.25, or $8.25, or $10.10 worth of output.  But there’s no reason to dis-employ the holders of those jobs:  by expanding the EITC and various means-tested transfer programs and leaving wage-determination to market forces, we can deliver the added income and spending power to those of modest skills (or just in jobs or areas of modest returns to skill) without sending anyone to the unemployment line.

Indeed, social justice demands that we do exactly that.  One simply can’t argue that it is right or just to eliminate your job so that my family can get a raise when there’s a way for my family to get that raise without costing you your job.  Accordingly, we should all hope that Mr. Biden and Congress come to their senses and we unite around a policy that increases eligibility and benefit levels for the EITC, and that they stop fighting for $15.