Yes, the GCEI Is Regressive: A Response to Senator Madaleno and Delegate Jones

Program defenders claim that because people in those counties earn so much money and live in expensive houses, they need state subsidies to help pay their school officials, employees, and contractors, so they can live in those high-wage counties. In forums like this blog, The Baltimore Sun, The Herald-Mail, and The Daily Record, I’ve responded that that’s nonsense: surely people in Maryland’s richest counties—which are some of the richest political jurisdictions in the world—can afford to educate their children without state help.

It’s the last forum that caught the attention of two prominent Maryland lawmakers, Sen. Richard Madaleno (D-Montgomery), vice chairman of the Budget & Taxation Committee, and Del Adrienne Jones (D-Baltimore County), chairwoman of the Education and Economic Development Subcommittee. In a response [$] in TDR, they claim my criticism is driven by partisanship, and they offer a defense of the GCEI program that is … peculiar.

I just finished writing a letter of reply to Madaleno and Jones, which I’m posting here:

I read with interest your December 10th response in The Daily Record to my op-ed on Maryland’s Geographic Cost of Education Index program.  Your response suggests a number of misunderstandings of the GCEI program and my criticism of it.  Some of those errors are yours but, to be charitable, some may be on my part as well.  I write this letter in an effort to address those misunderstandings.

First, you claim that my op-ed was a “partisan attempt to defend Gov. Larry Hogan’s de-funding” of the program, and a “scare tactic” taken from “the national Republican playbook.”  In fact, I am a political independent and my organization, the Maryland Public Policy Institute, is a nonpartisan organization.  The GCEI program has been funded by both a Republican governor, Robert Ehrlich Jr., and a Democratic governor, Martin O’Malley, and Hogan—a Republican—has decided not to challenge GCEI funding in future years.  I criticize all three of those governors for their GCEI policies, and I explicitly noted Hogan’s decision in my op-ed.  As for your claim that my criticism comes from the “national Republican playbook,” I’m unaware of such a document and what it says about Maryland’s program.

Second, your op-ed gives the impression that I favor cutting program funds for Baltimore City.  In fact, I explicitly stated in my op-ed, “In the name of economic fairness, the regressive GCEI [program] should be ended, save for help for Baltimore City.”  My argument is that the program shouldn’t be subsidizing rich Marylanders, yet the majority of the program’s funds go to the state’s wealthiest counties.

Third, you offer an extensive justification of the program because of the growth rate in the number of children on Free and Reduced Meals (FRM) in counties that receive GCEI funds.  I confess that I do not understand this argument, because it seems the variable of concern should be the percentage level of FRM children, not the change in that level.  It is the level that indicates the school systems’ relative burdens in helping needy children—burdens that may require state assistance.

To understand this, imagine two counties, one in which 55 percent of children receive FRM and the other in which 30 percent do.  The first county has struggled with the same high FRM percentage for decades, while the second recently experienced an increase from 27 percent.  Thus, the first county has a far heavier poverty burden, even though its growth rate is flat, while the second county’s growth rate is 10 percent.  It would seem that only a poorly designed program would assist the second county with its FRM burden but not the first.  Yet your analysis gives attention—and state money—to only the second county.

You call attention to Prince George’s, Anne Arundel, Howard, and Montgomery, because those “will see the largest percent increases in the number of students that are receiving free and reduced meals.”  Yet, with the exception of Prince George’s, the percentages of those counties’ students receiving FRM in 2015 are well below the state average of 46 percent: Anne Arundel is 34 percent, Howard is 21 percent, and Montgomery is 36 percent.  Those percentages are, of course, what we would expect from such well-heeled counties, which have average household incomes of $87,430, $109,865, and $98,221 respectively. In contrast, high-poverty counties Allegany, Dorchester, and Garrett, with household incomes of $39,293, $46,361, and $45,206, have FRM percentages of 57, 67, and 48 percent.  So, though those poor counties have high relative FRM burdens—much higher than wealthy Anne Arundel, Montgomery, and Howard counties—they receive no GCEI funds.  Thus I do not understand your justifying the program on the ostensible grounds that it benefits school systems with difficult FRM burdens.

You may be tempted to respond that Allegany, Dorchester, and Wicomico receive benefits from other programs, and that is true. But that goes to my point: with the exception of Baltimore City (discussed above) and perhaps Prince George’s County (which is nonetheless a relatively prosperous county, with an average household income of $73,623), the GCEI program benefits wealthy Marylanders’ school systems.  The very existence of such a program contradicts the reason for state funding of local schools: why should the state subsidize a local service if not to help the economically disadvantaged?  Certainly rich counties like Anne Arundel, Calvert, Charles, Montgomery, Howard, Queen Anne’s and St. Mary’s—which have household incomes above $85,000 a year, making them some of the richest counties in the nation—can afford to educate their kids without state handouts through the GCEI program.

This leads to the most important misunderstanding, concerning the GCEI program’s regressive nature.  You argue that because variables other than wealth are used to calculate the GCEI, then the program isn’t regressive.  Yet two of the most important variables in the GCEI calculation are county wages and housing unit values, and those correlate directly and strongly with wealth.  As a result, the GCEI slants heavily toward the rich counties, as shown by the upward-sloping trend line in the following scatterplot of Maryland counties’ household incomes and GCEIs: 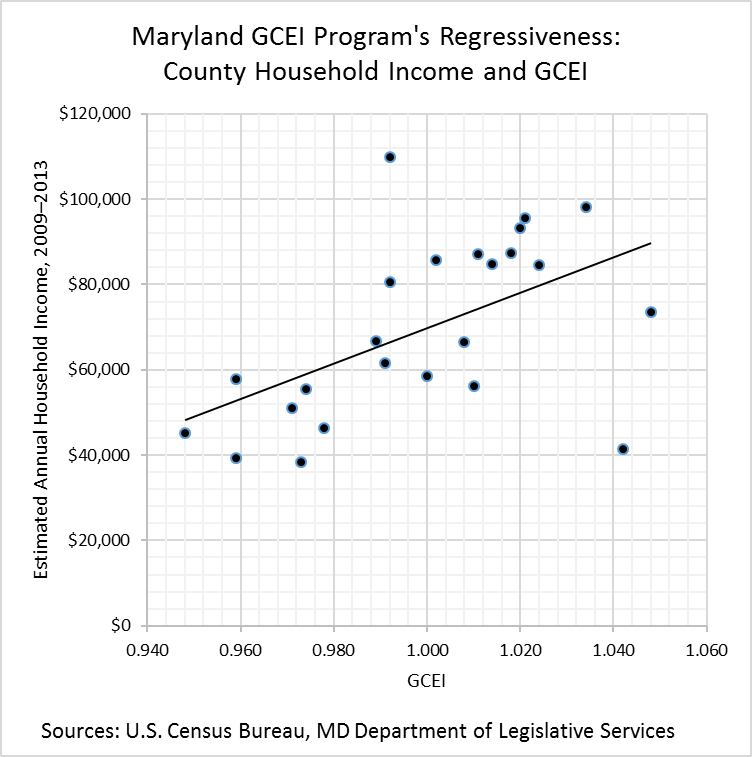 I do concede that calling such a program “regressive” is a judgment call, and perhaps my judgment is incorrect.  Of course, I’d be very interested in considering—and sharing with MPPI’s readers—any additional arguments you might have that the GCEI program isn’t regressive, keeping in mind that the arguments you presented in The Daily Record were unpersuasive for the reasons given in this letter.  I do note that you would be undertaking a difficult task because the program sends so much of its money to Maryland’s richest counties, and it does so in part because those counties’ residents make so much money.

If the two lawmakers respond, I’ll post their response on MPPI’s blog. And I’m interested in hearing what you think: am I off-base in thinking that the GCEI program is regressive, or do Madaleno and Jones not recognize a blatantly regressive government program when they see one?