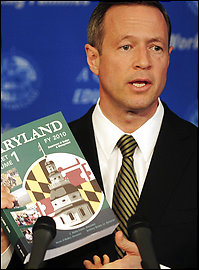 Governor Martin O’Malley claims finished fiscal year 2010 with a nearly $300 million surplus. But the “surplus” is a sham. It was accomplished only after nearly 60 transfers from Special Funds to the General Fund, totaling almost $600 million, and by cutting the budgets of over 20 programs by $342 million during the same period. Not only that, but O’Malley’s administration paved the way for this spectacular finish to his first term in office by cutting state aid to Special Funds each year.